Written by  Sam Collins Jun 27, 2020
Published in IT Security News
Tagged under

Apple this year will boldly go where its peers have gone before by implementing support for encrypted DNS in iOS and macOS.

When you visit a website with a browser, or connect to a service via an app, the software will, typically, in the background send domain-name system (DNS) queries to DNS servers, such as ones provided by your ISP, to translate domain names, like itsecuritycentre.co.uk, into network IP addresses the programs can use. These queries are typically sent unencrypted, meaning eavesdroppers on the network path can snoop on the names of sites and services you're using, and modify the query results to redirect you to malicious websites.

Encrypted DNS, as its name suggests, encrypts those queries to shield them from snoops and meddlers. 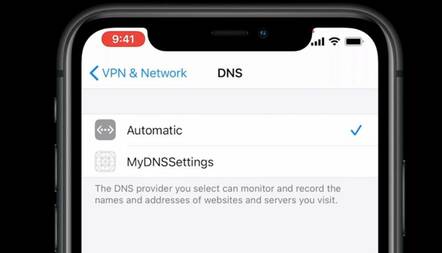 Apple's encrypted DNS support shown off at WWDC this year

Apple's updated code will allow those offering DNS services, and enterprise organisations administering corporate software via Mobile Device Management, to create apps for configuring DNS settings so they use an encrypted transport.

For example, a service provider like Cloudflare could create a network extension app using the NEDNSSettings class to switch a device to use DoT/DoH systemwide using Cloudflare's resolvers. Organisations using MDM will be able to do so by applying a Profile to managed devices.

Also see: How to Remove a Virus From an iPhone

Developers will also be able to create individual apps that allow users to choose to make app-specific connections over encrypted DNS using the NWParameters.PrivacyContext object and standard networking APIs.

As demonstrated in the video, an iOS app implementing encrypted DNS can be activated via Settings -> General -> VPN & Network (a menu called simply "VPN" on current iOS 13 systems).

Sam is the most experienced member of the team having worked for 19 years in the tech industry and now tech journalism. He is full of passion for all things tech and this comes across in his work.

At large percentage of sporting institutions, organisations and teams in the UK have suffered a security incident in the...

The National Cyber Security Centre has received the millionth submission to its Suspicious Email Reporting Service. ...

Is your boss spying on you whilst you are homeworking?

The recent worldwide move to working from home has caused concern amongst employers.

Apple this year will boldly go where its peers have gone before by implementing support for encrypted DNS in iOS and mac...

Exactly how many of the devices that include Ripple20 bugs are directly hackable via the internet remains far from clear...

IBM is making a move forward with its homomorphic encryption (FHE) solution, providing encryption for in-use and shared ...

The government is to invest £10m through March 2024 from various sources to fund nine academic cyber security projects ...

Good reasons to use a proxy server

A proxy server – is a computer on the internet which acts as a middle-man between your computer and the website or ser...