Are VoIP VPNs Worth It?

Written by  Guest Contributor: Colin Marks Technical Journalist May 19, 2020
Published in IT Security News
Tagged under

VoIP is a godsend – it lets you keep in touch with anyone you want no matter where you are in the world.

VPNs are great too since they protect your privacy by hiding your IP address, and encrypting your traffic.

So should you use both together?

Who Exactly Should Be Using a VoIP VPN?

Well, I personally say that everyone should be using that combo.

But to get more specific, a VoIP VPN would be perfect for people who:

A lot of countries block VoIP traffic and apps, either continuously or intermittently. Some good examples include Bangladesh, Egypt, Morocco, and the UAE.

If you plan on visiting those countries, you should mentally prepare to not have access to VoIP services at random intervals – basically, whenever the government doesn’t want you to.

If you use a VPN, though, you can hide your IP address, so firewalls no longer regulate your web access.

VoIP apps normally offer decent encryption, so there’s nothing to worry about, right?

Despite the encryption, many VoIP apps had serious weaknesses that hackers could exploit to monitor users’ VoIP traffic. Here are a few examples:

• Apple’s FaceTime actually had a weakness that made eavesdropping possible.
• A vulnerability in the Android Skype app made it possible to eavesdrop on others.

Check this out – the NSA managed to crack Skype encryption back in 2011. And they’ve been accessing Skype data ever since.

Hardly surprising, though – considering that Microsoft now owns Skype, and it’s no secret that the company loves collaborating with the NSA.

But here’s the worst part – the protocol VoIP apps rely on (SIP – Session Initiation Protocol) is flawed by default. It actually was never designed with security in mind from the get-go.

In fact, SIP is similar to HTTP to an extent, and its addressing resembles SMTP, which means hackers can see the following data in the header:

Pretty serious stuff, to be honest.

But there’s good news – if you use a VPN when making VoIP calls, they’re routed through an encrypted tunnel. Thanks to that, nobody can spy on your VoIP traffic.

3. Want to Save Money on VoIP Calls

While VoIP apps are normally free to use, international calls aren’t free to make.

But due to price discrimination, call rates can vary from country to country.

For example, a Skype subscription with unlimited minutes can cost $4 per month in Poland, and $7-8 per month in the Netherlands.
Not a huge difference, but it adds up in the long run.

Well, a VPN hides your IP address, making it possible to spoof your geo-location. So, you can use a VoIP VPN to try and get better call rates.

4. Want to Get Stable Speeds

Do your Skype calls get lag and buffering every week at specific hours?

Then it’s likely that your ISP is throttling your bandwidth – basically, intentionally lowering your online speeds when you use Skype (or any other VoIP app).

Pretty simple – because they think you’re using up way too much data with your VoIP calls.

That can be the case if you spend hours on calls. But then again, that’s understandable – maybe you have a daily call with your long-distance partner, or with your business partners and stakeholders.

Now, you can talk with your ISP about this, and they might deny it, or they might just claim they’re doing it to prevent network congestion at peak hours.

But the truth is they likely throttle your bandwidth to “convince” you to buy more expensive data plans and subscriptions.

I mean, they can do that easily. They can actually see your web traffic, and they can detect VoIP data packets. So, they can easily throttle your speeds for that specific service.

Well, with a VPN, you don’t need to worry about that. The service encrypts all your traffic, so your ISP won’t know what VoIP app you’re using, or that you’re using it in the first place. They’ll just see pure gibberish.

Without that info, they won’t be able to selectively lower your speeds.

But Wait – Doesn’t a VPN Slow Down Your VoIP Speeds?

Yes, that can happen.

Normally, you shouldn’t notice a huge drop that would make your VoIP calls unbearable. But it can still be noticeable.

Luckily, you can make changes to improve speeds – like picking a server that’s closer to you, and using a less resource-intensive protocol.

All the more reasons to make sure you pick a decent VPN service, I’d say. 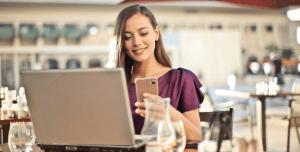 How Do You Find the Right VoIP VPN?

You’re obviously going to need to make sure it has fast servers with unlimited bandwidth – and tons of them too.

Also, VPN protocol variety and military-grade encryption are nice touches too. Besides that, the provider should keep zero logs, and offer cross-platform compatible apps.

And those are just some things to keep an eye on.

So yeah, it’s gonna take you a few hours at least to find a good VPN.

To VPN or not to VPN for business users Are VPNs for Cryptocurrency transactions needed?

Researchers analysed some of the most popular VPNs and discovered that two of them were affected by vulnerabilities that...

Remote working is receiving a great deal of attention recently for obvious reasons. The world has changed and remote wor...

As Covid-19-related cybersecurity threats continue to multiply, three in four of home workers are yet to receive any cyb...

The personal data of over 9 million EasyJet customers has been infiltrated by hackers, including over 2,000 users' credi...

The UK’s power grid middleman Elexon has announced it has fallen victim to a cyberattack, which did not compromise pow...

The importance of cybersecurity for UK businesses

Technology is constantly changing and at a pace which is hard to keep up with, but 'safety first' always applies. ...

As more UK and European governments turn to tracing apps in the fight against the coronavirus, a deep-rooted tension bet...

Tips to help secure your cloud data in the UK

In this digital age, it’s not a great idea to trust someone with your sensitive data. ...

Nearly half (48%) of the UK public surveyed about the NHSX COVID-19 tracing app do not trust the UK government to keep t...

To VPN or not to VPN for business users

It’s a question many organisations are asking as they work to provide secure and reliable remote access at scale. ...